Editor’s Note: Another awesome post from the wonderful world of Virally Supressed: Muckraking for the Modern World out of Cincinnati, OH. This article was originally posted by Drew Gibson on Virally suppressed . After you read this, head on over to Virally suppressed and let Drew know that Raging Chicken Press sent you! And, while you’re at it, follow Virally supressed on Twitter @SuppressThis

Just about once a year, I am struck by an unshakable urge to write poetry and, as it turns out, that once a year is now. I don’t claim to be a poet, but hopefully the words I’ve written down will resonate with a few of you as we try to remember the lives of men like Mike Brown and boys like Tamir Rice, who have been killed for the perceived sin of their blackness. I hope you enjoy.

With calves clenched and spine straight, her eyes flit
From sidewalk to sidewalk—her vision marred
By the kaleidoscopic flutterings of her helmet
As police lights ping-pong off her visored
Eyes. She stands there, licking her wind-battered lips
Free from the dribs and drabs of salinated snot
Leaking from her face. Vice like, her fingertips
Clutch onto the little trash can shield bought
Accidentally by those assembled before her.“You are unlawfully assembled,” a tinny
Voice tells the crowd from atop some armored
Leviathan. “Disperse, or you will be
Arrested.” The woman holds her truncheon hard,
Bracing herself—waiting for that moment
When she must strap on the mask hanging by
Her side and drink deep from the stale ferment
Of her recycled breath, watching their eyes
And throats suffocate in the alien air.

With a few weak whistles the flares shoot up,
Arching over the disobedient masses
Like neon ticker-tape before hell erupts.
Mortars filled with lachrymatory gasses
Hurtle forward and explode, vomiting
Plumes of ravenous smoke at the protestors.
Doubled over, they stumble through the burning
In their lungs, trapped in a haze of horrors
When the rubber bullets come streaming in.

Throwing on her mask, the woman turns around
And trudges carefully through the chemical mist,
Unable to see her feet touch the ground,
Tightly grasping her gun in front of her chest.
She drifts away from the road, away from
The smog and the screams until she finds herself
Standing in a parking lot—alone. With numb
Hands and a flushed face she thrusts her rifle
Out and begins walking when she hears it.

It comes from behind a dumpster. Rustling
Faintly and totally hidden from sight
If not for the pair of Jordans poking
Their bleached white tongues out into the light.
The woman begins to slowly circle
Around until she is able to aim
her gun just above the person’s navel.
“Put your hands where I can see ‘em!” she screams.
Nothing. “I said put your goddamn hands up!”

Eventually, a pair of hands come
Trembling upwards—hands attached to the brittle
Wrists and spindly arms of a young black man;
Or is it a young black boy—she can’t tell
At first, but it soon becomes clear that he
Can only give the illusion of manhood.
“Move out from behind the dumpster slowly”
she says. “Any sudden movements and I could
be forced to open fire. Do you understand?”

As she finishes barking out her orders
He inches his way out from his hiding place,
His hands held up, shaking like a conifer
In a stiff breeze. Tears are streaming down his face
as he burbles out, “I don’t want to die.”
She stays strong, keeping her gun fixed on him.
“Don’t move!” she yells, before starting to cry.
Her sobs stay soft and shuddering even as the rims
Of her gas mask’s goggles dampen and brine. 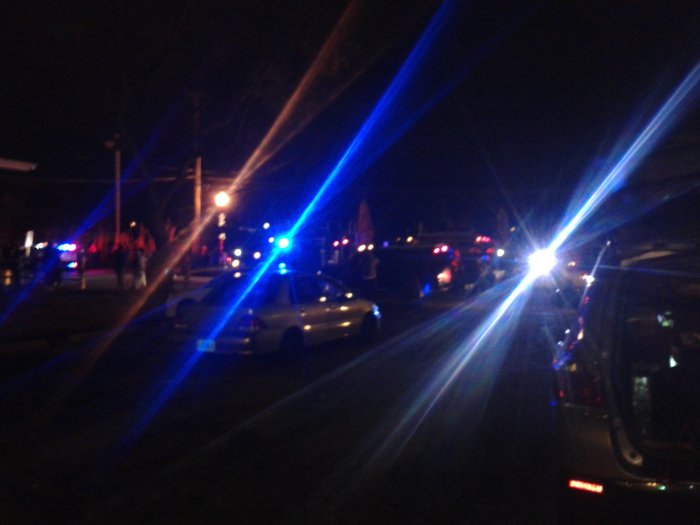