“Protest beyond the law is not a departure from democracy; it is absolutely essential to it”
— Howard Zinn

“A small group of thoughtful people could change the world. Indeed, it’s the only thing that ever has.”
— Margaret Mead

The Corbett Natural Gas Administration’s assault on Pennsylvania’s environment has crossed a proverbial line in the sand.  House Bill 1950, dubbed the Impact Fee bill, is doing more than restricting municipalities in the state to imply strategic zoning ordinances to deal with Natural Gas Companies.  It is also time for the environmental activists who are on the front lines of this fight to take more extreme non-violent direct actions because marches, petition drives and phone banks are not changing the minds of those on “Well Street.”

On February 12, 2012, the Pennsylvania House of Representatives and Senate delivered the industry drafted Impact Bill to Governor Corbett’s desk for his signature.  Act 13 has a slew of issues accompanying the bill, but the most contentious issues are the zoning restrictions regarding the Oil and Gas Act of 1984.  One of the provisions of the Oil and Gas Act gave local municipalities the autonomy to decide where oil rigs and gas pads are allowed to be located through the zoning process.  A local municipality uses zoning enforcement and regulations to determine the locations of residential, commercial and industrial zones.  This process allows communities to create buffer zones between heavily industrialized areas, which can produce high volumes of traffic that the local infrastructure cannot handle or possibly produce extremely toxic waste, and residential areas, which is where people live.  The Local Impact Fee Bill has re-opened the Oil and Gas Act of 1984, and it striked out the zoning provisions inside the Oil and Gas Act.

The destructive nature of the Impact Fee Bill takes away the ability for local governments to properly decide if gas and drilling operations are safe in a particular area of their town.  The setbacks, which can be looked at as a buffer area, states that gas wells and containment ponds holding used frack fluid must be a minimum of 300 ft away from any building, which includes hospitals, schools and residential developments. The minimum setbacks for compressor stations, which the air pollution generated by the stations is not regulated by Act 13, is 750 feet from any building.  The bill explicitly states that the setbacks are buffers between the gas wells/compressor satiations and physical structures not the property lines the building lies within.  On top of the zoning issues, if a permit is issued in an area a municipality thinks is not safe for the community, the township has lost their right to battle the gas well permit that the Department of Environmental Protection has issued.

The next question to ask is who are the regulatory bodies overseeing the “wild west expansion” of the Marcellus Shale Industry?  As stated above, the Department of Environmental protection is responsible for issuing gas well permits, and has the authority to shoot down any blowback from the municipality.  If gas companies in the state are in violation of any environmental regulations, the DEP is still allowed to issue permits to those companies.  The other regulatory agency overlooking the expansion is the Public Utilities Commission (PUC), which is an appointed regulatory body.  The PUC has zero to little experience with zoning and environmental planning, but this regulatory body has the authority to renege the slightest zoning ordinance that interferes with the gas drilling process.  The PUC also has the authority to void the collection of impact fee money if a community is to enact any ordinance hindering a company from drilling.

But wait!! This bill has some more gems people in Pennsylvania should know about.  This bill is also putting members of the medical community through the ringer.  If a family physician or local hospital treats one or multiple cases of bromide or benzene poisoning (a minor example of the chemicals associated with hydraulic fracturing), that doctor is required to sign a non-disclosure from, which essentially restricts the doctors from sharing medical information with other colleagues or to call for a public health inquiry in medical journals.  Since hydraulic fracturing fluid is not classified as a hazardous liquid, the DEP or citizens are unable to track the transport of wastewater from the gas pad to the wastewater  treatment plant, thus essentially ignoring the “cradle to the grave” law which requires strict paperwork overseeing the transport of hazardous material.  And lastly, the impact fee will contribute to protecting the Commonwealth’s clean air and clean water, but townships will only receive the impact fee money if they comply with all of the provisions of Act 13.

What are our options to combat this bill?

For a few years now, many environmental groups in Pennsylvania have been spearheading petition drives and phone bank campaigns for a moratorium on gas drilling.  Environmental groups and environmentalist must realize and take a hard stance against a moratorium because a moratorium implies that there is a safer alternative to hydraulic fracturing.  We must dig our feet into the ground and push for a full-out ban on natural gas drilling because it is naïve to believe that science will provide us with a safer, less energy intensive extraction method to the extremely energy intensive hydraulic fracturing method.  I know you are asking a question; “Since we have spent months or a year or two gathering petitions and making phone calls, what other options are left for environmentalists to explore?”

There are two options we have left; we can either sit down with our thumbs up our asses or we can start using more clever non-violent direct action and civil disobedience to fight these injustices against our environment.  Non-violent civil disobedience is the option of last resort to make a democratic statement that targets injustices that violate the social contract.  When a member of the community commits an act of civil disobedience, he or she must realize what the end results of their actions will be.  With the efforts to put in place a ban or a moratorium on hydraulic fracturing, we must realize that we are coming to the end of the road, and we, as a collective body of younger and older citizens, must utilize civil disobedience and other direct actions to make the clear and concise democratic argument; “That we will do whatever it takes to protect our environment, our air and our water.”   While more families across the state are having their well water contaminated by frack fluid and methane seepage, we must recognize that the heavy-handed provisions and restrictions of Act 13 are putting the environmental well-being of this state and the health of those in the Shale Region in jeopardy. 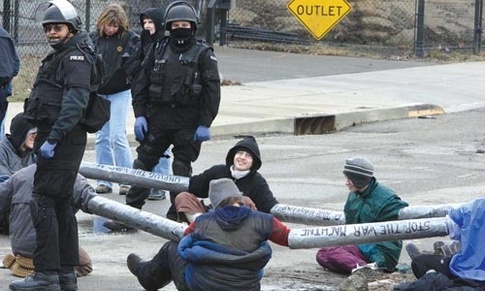 Civil disobedience may be a taboo subject for some to conceptualize, but those who do think it is taboo must put their differences aside and show support for the groups of people who are willing to get arrested for this just cause.  A civil disobedience movement will not sustain itself on its own, but that is why there needs to be a “diversity of tactics.”  We need those who are willing to commit the civil disobedience to be in unison with those pounding the pavement and going door-to-door collecting signatures, protesting outside of the state Capitol or legislative offices, and with those inside the capitol talking to our representatives and senators about these issues.  Questions about how the acts of civil disobedience will be perceived by the local media are a legitimate concern, and that is why we must not rely on the local media.  We should forge relationships with media members, but we must also be the media.  In the age of the digital world, we have the opportunity to use livestream, and social media websites to provide friends and followers with up to the minute reporting.

As an environmentalist and activist, the organization with-in the Marcellus Shale movement is promising and extremely hopeful, but now is the time to ramp up our actions statewide.  We must build relationships with those who are living and are not living in the Shale Region, and we must make no reservations to let our so-called leaders know that we ready to fight their horrendous environmental policies because our actions today will ultimately affect the natural beauty of Pennsylvania 10 years or 100 years from now.

*Information about Act 13 in this article came from fact sheets created by Penn Future and Berks Gas Truth.