This past Sunday, we had a discussion on Lehigh Valley Vanguard Live about the murder of Freddie Gray and the resulting Baltimore riots.

The first story I came across while doing research on Gray’s murder was disturbing to me. A headline read “Protestors Destroy a CVS.” There was a sterile looking picture of a map pointing out places which had been damaged during the riots. To me, and hopefully to others as well, this is missing the point.

On a day when people are rising up to protest the violent (and when I say violent, I’m referring to the “rough ride” in a cop car which caused Freddie Gray to suffer a snapped neck and a crushed voice box) death of a young black man arrested under mysterious circumstances. In true capitalist fashion, we are told to focus on destroyed businesses.

Not just destroyed businesses, but massive conglomerates like CVS, which are a blight to poor communities.

It seems every few months there is a new CVS or other pharmacy built in the Lehigh Valley. In one neighborhood in particular, there is a CVS, Rite Aid, and Walgreens on the same block.

Pharmacies have become a beloved tenant of capitalist culture. People are forced into working conditions which tax their wellbeing. These conditions demand they sit, stand, or leave their loved ones for inordinate periods of time. Pharmacies are a needed component to capitalist societies for people to cope with the ills of our time.

We live in a world where people are okay with institutional racism and violence, but completely revolted when kitschy pharmacies which sell shitty food, knick-knacks, and drugs are damaged by civil unrest.

What we can glean from this is our society is one which values property over people. Money over human lives.

“Mysterious” deaths of unarmed people will continue until we stop accepting the media spin. How many people saw that article and said “fuck, no, not CVS!”? Maybe you did, but it was likely because you didn’t consider what you were agreeing with. This doesn’t make you a bad person. Alternately, I doubt you are saying “wow I’m glad this young man died!” But did you stop to question your loyalty to property over a human being?

People are looting businesses, yes. Are there opportunists who just want to come along for the ride? Maybe. Can’t we say the same for racists? I bet if you asked a racist cop if they’ve ever questioned their racist beliefs, they’d show you they are just along for the ride too.

The protestors may not have peaceful or even sophisticated methods for expressing themselves in some cases, but look what they are up against. They are protesting groups of people who make traffic stops and petty arrests simply because individuals are black. People with institutional power who refuse to practice humane forms of policing. Not every officer, but many.

If institutions treat minorities and poor people like animals, why should they perform some duty of “civility”? When you don’t grant legitimacy to the people protesting, you deny their systematic oppression. Ask yourself: “did they really need another CVS?” or did they need justice? Have we forgotten the cry of Ferguson, MO?

“No justice, no peace. No racist police!”

People can be reimbursed for losses to property, but you can’t reimburse a family and community for a lost loved one. Many are saying: “why are they destroying their own community?!”

You don’t understand. To them, their community was already destroyed.

“If one really wishes to know how justice is administered in a country, one does not question the policemen, the lawyers, the judges, or the protected members of the middle class. One goes to the unprotected — those, precisely, who need the laws’s  protection most! — and listens to their testimony.” –James Baldwin 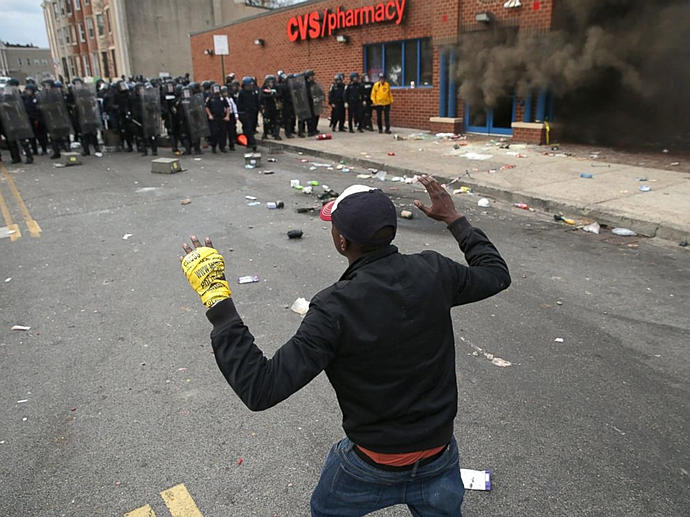