So the Pennsylvania Democrats are using the nomination of Chris Abruzzo, a climate denier, to head the Department of Environmental Protection as a cynical ploy to raise money for the party while Democratic senators have voted for and vowed to support the nomination Abruzzo.  Chris Abruzzo, who has no experience working in the scientific community, stated at a committee hearing last week that:

“I’ve not read any scientific studies that would lead me to conclude there are adverse impacts to human beings, animals, or plant life at this small level of climate change.”

“I don’t think until I sat in [Krancer’s] chair, that I realized how challenging it is to lead an agency that, in many respects, is driven every single day by science and facts.”

Abruzzo met little resistance as the Senate Environmental Resources and Energy Committee voted for his nomination by a 10-1 margin.  The “yes” votes had 3 Democrats: John Yudichak (minority chair), Andy Dinniman and Jim Ferlo.  The only dissenting Democrat was Daylin Leach.

On social media, environmentalists and party activists set up a petition which has gathered over 5,000 signatures and an event to voice their concerns to their state senators.  A couple of activists reported that more democrats are looking to support Abruzzo’s nomination for the sake of the preserving the institution that is the Senate.  One wrote:

I spoke with State Senator Rob Teplitz. He says that he takes a generally deferential view on gubernatorial nominees. I told him I appreciate that, especially given the gridlock on nominees we currently see at the Federal level.

He clarified that it is tradition, since Acting Secretary Abruzzo is a constituent, and since Sen Teplitz sees no ethical issues with the Governor’s nominee, that he did present and introduce him.

Teplitz did say he intends to vote to seat Abruzzo, although he is not the ideal nominee he would pick. Teplitz said he feels Abruzzo meets “minimal standards” for that office. Teplitz said that, in context with the entire exchange, Abruzzo did not come across as a climate denier to Teplitz.

I told him I respectfully disagree with Teplitz position, told him I oppose Abruzzo due to his lack of relevant experience due to his statements on global climate change. I also thanked Rob for his continuing diligence in pursuing meaningful government reform, which is an issue I hold important for my Senator to improve on my behalf.

Just called Schwank’s Reading office. The aide was pleasant, but clearly didn’t know who I was talking about, when I urged rejection of Abruzzo for DEP Secretary–!?! Claimed she’s more about handling local constituent concerns, rather than legislative issues. I asked her if I
should also call Harrisburg, but she assured me she would get the message to Sen. Schwank today. I’ve now gotten my 86 year-old mother mobilized too–she’ll be calling shortly & also wants to call Gerlach, even though she changed party affiliation awhile back

Then the Pennsylvania Democrats jumped in on using this issue as a cynical fundraising ploy.  Dylan Gaffney, the finance director for the PA Dems, sent out an email blast with a graphic reading:

1) 97.2% of climate scientists agree that climate change is real and already adversely affecting the planet

3) A global temperature increase of 2 degrees celsius is likely by the end of the century, critically impacting global agriculture

Climate change is a real threat to Pennsylvania

Right, so lets donate our money to a political party that has already had it’s Senators vote for a climate deniers and with more senators vowing to vote for this climate denier.  Contribute, so you can cut your nose off and think you’ll get better results from the minority party! 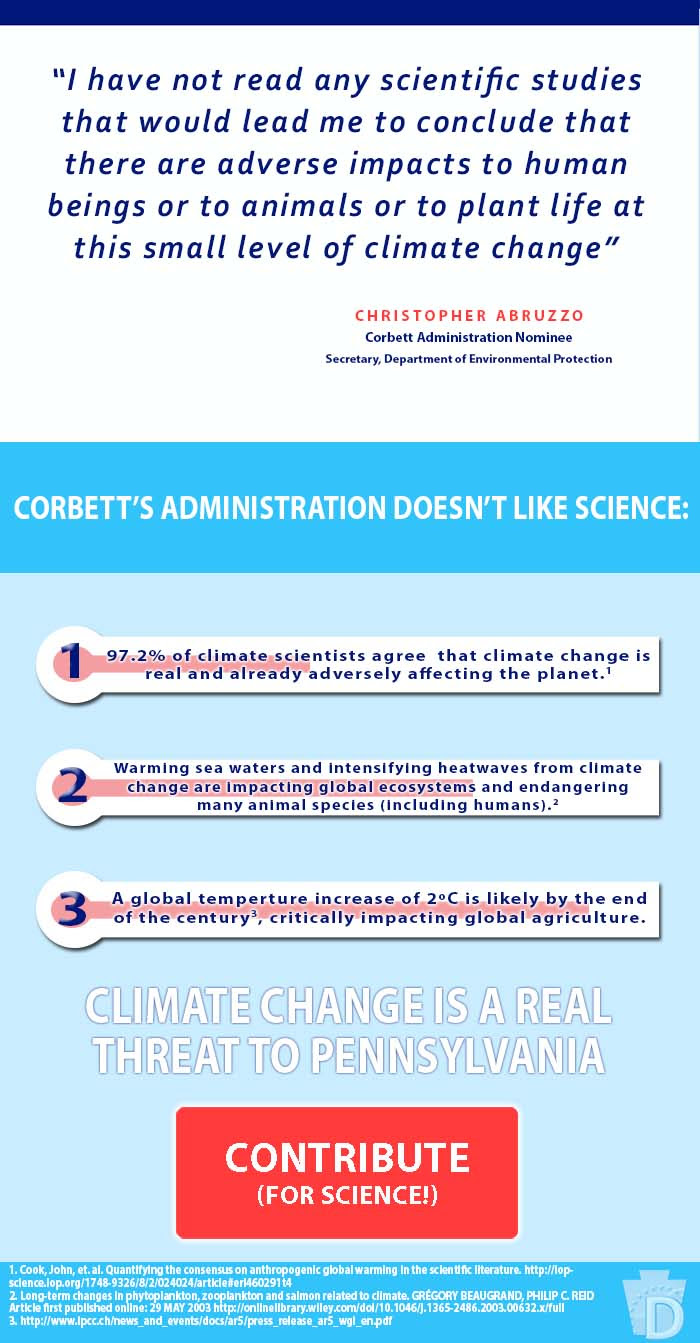 1 Comment on Hey PA Dems: Instead of Asking for Fundraising Money How About Voting NO for the Climate Denier?